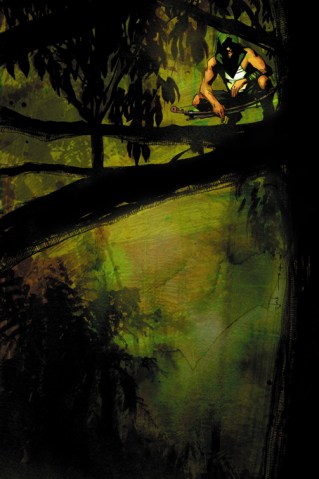 Like many others, I suspect, Green Arrow was a character I was relatively unattached to. I’d read Kevin Smith’s run back in the day, when he still wrote stuff I cared to read, but since then, it had been all quiet on the Green Arrow front. Then I started watching the rather fantastic Flash TV show, which spun out from Green Arrow’s own TV show ‘Arrow’.

The Arrow, as he is primarily called in TV land,  pops up in The Flash, and was cool enough for me to decide to go back and catch up on the Arrow. While not as good as the Flash has sometimes been, it’s a pretty great show and it prompted me to pick up some of the more recent Green Arrow comics of note.

First, Green Arrow Year One, which continues the Year One tradition of streamlining and modernizing our hero’s origins. Written by Andy Diggle (for whom the TV show character, John Diggle, is named) and with art by the always awesome Jock. The story features the future Green Arrow, Oliver Queen, as a younger man than traditionally shown. A spoiled rich kid who gets his kicks from extreme sports and exploring, he is betrayed by his one friend and left for dead, eventually being washed ashore on an apparently deserted island. Here, with only a bow, he survives and slowly but surely becomes the man who is destined to be Green Arrow. Soon he finds that the island is not as deserted as he believed and he finds himself up against a a gang of drug runners. In saving the drug dealers slaves and stopping their trade, he takes the first major steps towards becoming a hero.

Like most good Year One stories, this one cuts away all the unnecessary detail that can come to bloat superheroes back stories, giving us a straightforward and relatively simple story (one that is very well told though) that gets us inside our hero’s head and shows us how they became who they are today. 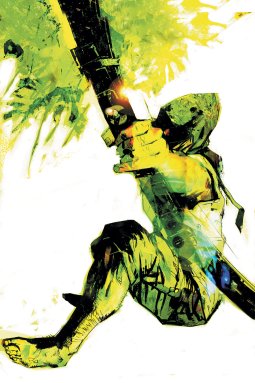 Year One was the status quo until the launch of DC’s New 52 event, which relaunched/reset most of their comics. The relaunched Green Arrow was not one of the better received titles and, as a result, writer Jeff Lemire, with artist Andrea Sorrentino came on board with Issue #17, essentially ignoring the earlier issues (or, in some cases, simply blowing up or killing all that came before) and rebooting the title again. The Lemire/Sorrentino run is basically one extended story which is collected in three parts, the first being ‘The Kill Machine’. 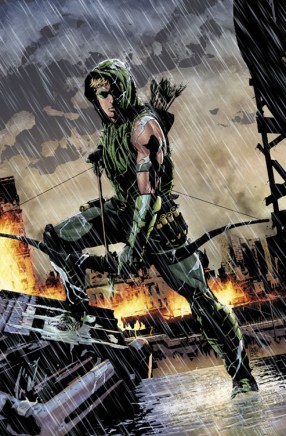 Lemire’s Green Arrow is younger, brasher, and more arrogant than most previous interpretations ,and Lemire begins his run by stripping Green Arrow (largely referred to as Arrow, like his TV counterpart) of everything when a new villain attacks. Arrow’s enemy knows his identity and much of his past. In their initial encounters he out-classes Arrow in every way. This leads Arrow on a quest that will reveal the truth behind his origins (now more reminiscent of his TV origins, but still much like Year One).

The second volume, The Outsiders War, finds Oliver dealing with the truth of his past while he is pulled into a conflict between the Outsiders, an age old group of warriors who are no longer content with remaining in the shadows. The storyline here, as well as Sorrentino’s dark and gritty approach to more realistic action, brought to mind the Ed Brubaker, Matt Fraction and David Aja run on Immortal Iron Fist a few years back. Maybe it’s just me, but it wouldn’t be surprising – in recent years, Batman and Captain America seemed to have, at a basic level, very similar storylines at the same time and, as a casual observer, DC and Marvel’s current big event stories, Convergence and Secret Wars, appear to be pretty much the same story. 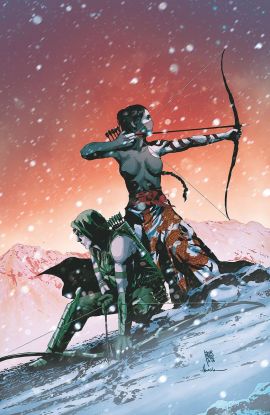 Lemire and Sorrentino wrap up their run with ‘Broken’ which finds Oliver returning home to Seattle to find that villains, old and new, have taken over the city. The Volume ends with a look into Oliver’s future, which was part of a different event, but as with an earlier issue that was tied into Batman Year Zero, Lemire does a pretty good job of making it stand alone, showing us where our characters could be in five years.

A rather dark run, which, while maybe not ‘fun’, is a darn good read. Lemire’s writing works well with Sorrentino’s art, which suits the story perfectly, but it can occasionally be a little hard to follow, probably as a result of there often being a lot going on in any one page. It’s not enough to cause a problem and I shouldn’t really complain at all, as Sorrentino pencils all 20 issues here – something that is pretty much unheard of these days! (Denys Cowan with Bill Sienkiewicz contribute with a look at Oliver’s updated backstory, as well as the origins of Diggle, whom Lemire introduces during his run). 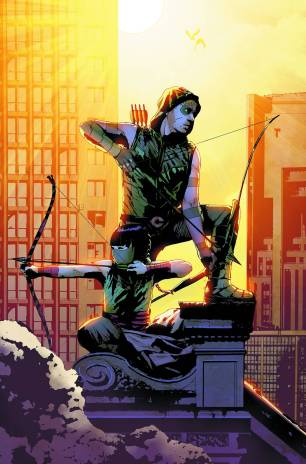 You can buy them here: Green Arrow on ebay